Please schedule a call with our team ASAP to discuss acquiring this deal. Our deals usually go pretty quickly, so please schedule with us now if you’re interested.

Book a call with me at -> https://hybridrealestateinvesting.com/call or fill out the form below and we’ll be in touch.

Who else do you know that might like to passively earn a double-digit return with income-producing real estate? With our “Investor Referral Program,” you get a $1,000 referral bonus – And you get that for every deal they do with us, not just the first one!

The Westwood Hills subdivision is about an hour Northeast of Kansas City and was originally designed, platted, and recorded in 1972. The City of Gallatin approved the development at that time. Due to the passage of time, we will need to obtain the City’s approval again, but the rules for such approval are minimal. Essentially, we need to coordinate with the utility company, and in so doing, the City will make the necessary approvals. Eleven of the original 53 lots were sold, and homes were built upon them. 42 lots remain to be built. Our plan is to keep the original subdivision as platted. However, we may add a few more lots where land is available, bringing the total to 46-50.

The City is fully behind us in developing this subdivision and the ordinance is only one page long! That’s a far cry from what it would be here in Colorado.

We are seeking a private lender to provide bridge financing of $300k and secure the development loan at which time the $300k will be returned. Purchaser to also pay the lender(s) carrying/interest charges estimated at approximately 10% per annum. The investor will receive 3 points on the $300k plus 50% IRR on all capital at risk during the development. If we don’t find an investor with the full amount we’ll structure this as a JV or Syndication. The minimum investment will be $50k.

We are estimating a maximum maturity date of 24 months from the date of issuance. Security provided by the Trust Deed in the property located in Westwood Subdivision, Gallatin, MO. We will be selling some of the homes using a lease-option and the lender(s) will have first right of refusal on these homes.

This page is not a complete description of the financing and does not constitute either an offer to sell or an offer to purchase securities.

This phase will complete the acquisition and development of the project. This phase will be complete when we have approximately 42-46 buildable lots completed. The infrastructure budget contemplates the completion of engineering, the stubbing in of water, sewer, gas, and electrical utility lines, as well as the completion of two streets, curbs, and gutters. The total estimated budget provided by the engineering firm is approximately $482,500.00.

This budget is based on the engineering estimate: 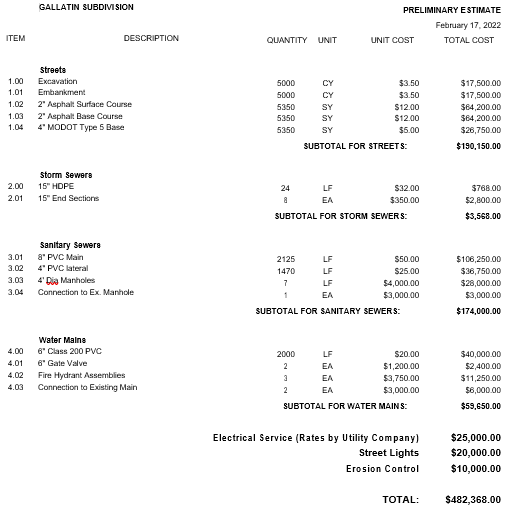 CEO – Mark Beach has over 30 years of experience in banking, construction finance, and construction operations. He began his construction career managing the infrastructure contract between Disney and the French government. Later, he consulted Disney’s EuroDisney construction operations focusing on supply chain, contract administration, estimating, and other administrative functions. Later, he consulted KFC-Canada with real estate acquisitions. He has helped raise a total of $250 million in capital for real estate developers and assisted developers in turnarounds and recapitalizations. Mark is a creative problem solver and has worked on many real estate deals of his own. General Manager – Matthew Beach started gaining experience in the construction field at a relatively young age (15 years old) working summers for local general contractors and taking construction classes in high school. After High School, he built homes for several more years working for general contractors and was promoted to the main foreman. He obtained his general contractor’s license and started his own building company while working for other general contractors when work was available. Matthew has owned and operated his own building construction business for nearly 25 years. He worked as assistant superintendent for R&O Construction building part of a mini-mall in St. George, Utah, and served as a foreman to other union construction companies. He has worked as Executive VP for MCK Construction and he has been an active member of the Carpenter’s Union for nearly a decade. Matthew has almost 20 years of experience building commercial buildings, hospitals, grocery stores, bridges, and even a major addition to the Fresno city zoo in California. 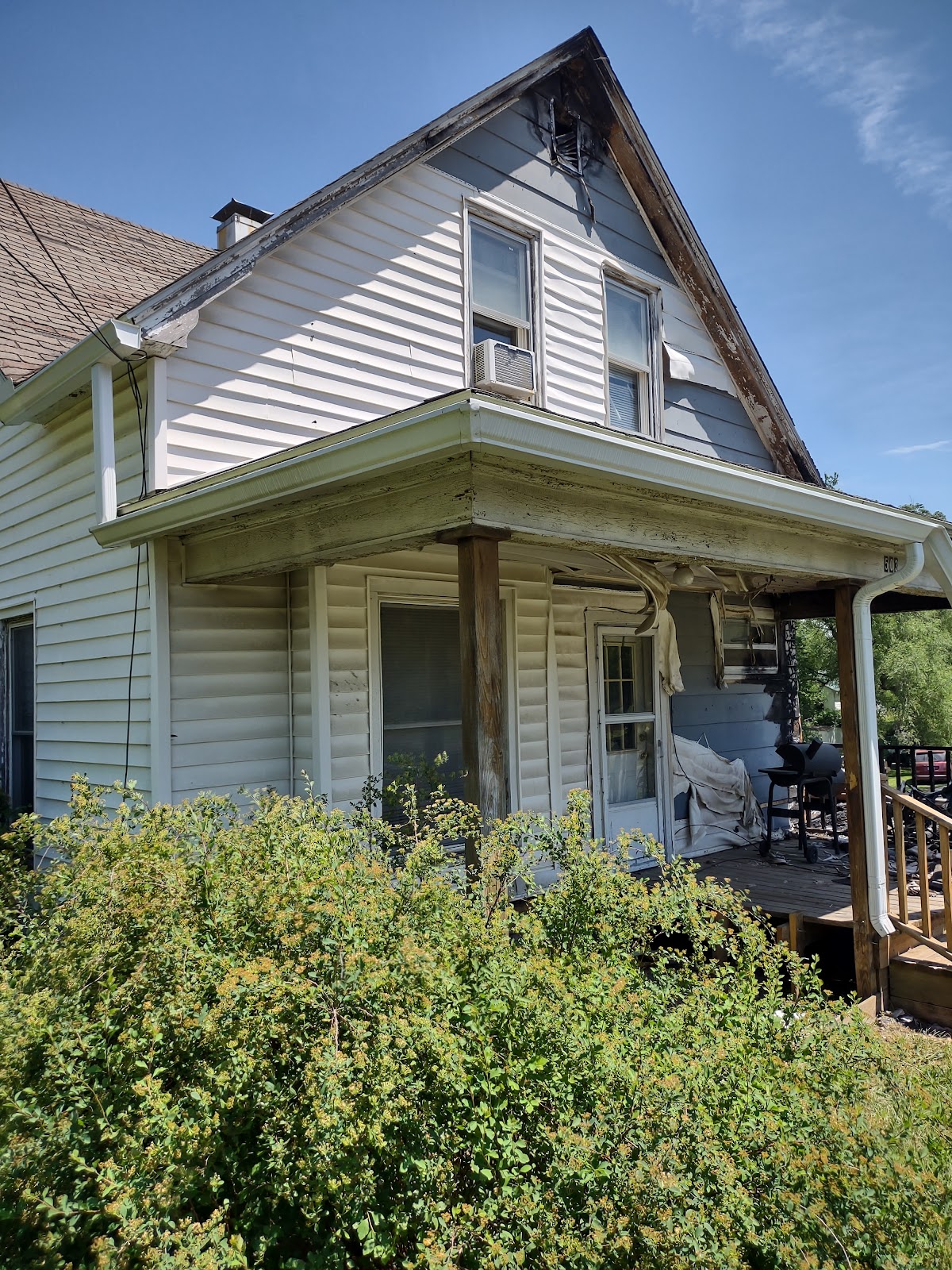 Obtain an as-built appraisal, and then obtain a construction loan. Profit-sharing distribution (the sales price of the project minus the actual cost of the project) will be based on fixed percentages of capital placed at risk and allocated as follows:

This home was burned in Dec 2021. The cause of the fire is suspected to be human caused, as opposed to electrical, or other natural cause. About 80% of the standing home was saved from the fire. However, due to the home’s age and general condition, the home should be considered a complete rebuild and expansion (new construction).

Plans to rebuild include:

Please schedule a call with our team ASAP to discuss acquiring this deal. Our deals usually go pretty quick, so please schedule with us now if you’re interested.

Book a call with me at -> https://hybridrealestateinvesting.com/call

We are looking for a private lender to invest $300k or up to three lenders with $100k each. We are paying 10% interest plus equity. Investor(s) would get their investment back after two years and retain a 2% equity and cash flow position per $100k invested.

The Current Ratio of Cash Flow to Purchase Price from day one is 16.5%.  After Stabilization, it will be 35.1%.

The rent hasn’t been raised for 3 years. Our local management company has confirmed after due diligence and Inspection that:

Muncie is an Excellent Emerging Market.

Muncie is rated as the most affordable market out of 400+ Metro Areas and we already have a great management team in place.

Below are the portfolio details:

The total cost of Rehab/Upgrade for the portfolio is $422,957 or an average of $6,934 per house. Rehab of 5 or more houses per month initially, adding more rehabs incrementally such that the repair/upgrade process will take ~ 8-10 months.

We agreed with our management Co & their Insurance Co to use their Umbrella Policy, under which they already have 2,300+ apartments & houses for many years. We are able to add any houses as a rider at any time to this policy. The rough formula for this insurance is: Coverage amount x .0065 bps → meaning $75k of coverage runs $487.50 per year. This insurance will be billed monthly. See the insurance cost using this estimation in the above link.

Please schedule a call with our team ASAP to discuss acquiring this deal. Our deals usually go pretty quick, so please schedule with us now if you’re interested.

Book a call with me at -> https://hybridrealestateinvesting.com/call